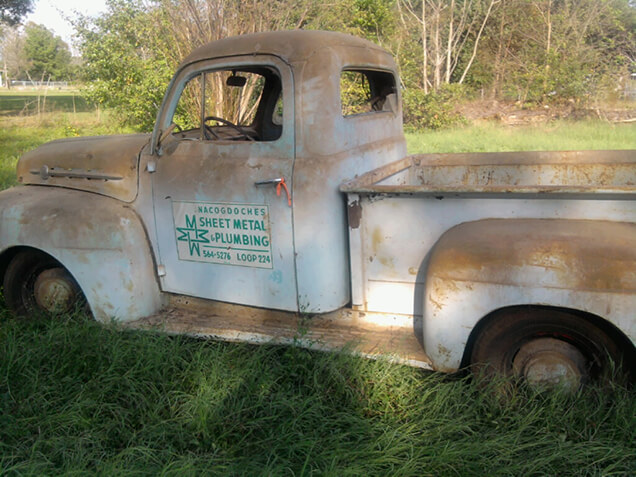 With the purchase of both these companies in 2008 and 2010, Jason Bradford, his family, support staff and employees continue to serve the Nacogdoches and surrounding areas with the utmost integrity and quality workmanship that has always been in the forefront of these long-standing companies that have been an important part of Nacogdoches History.

We would like to thank all of our employees past and present and all of our valued and loyal customers who have made this company what it is today, over half a century old. On March 21, 1963, the family business of Nacogdoches Sheet Metal Works was established in a little 500 square foot building on 205 Bremond Street with only one goal in mind: to provide exceptional quality of work and serve its community. The company had only one employee: the owner Coy Simms. He sometimes had to work throughout the night to fill all his orders which mostly consisted of manufacturing ductwork for all the Air Conditioning and Heating companies in the area and other sheet metal related jobs. After continued growth and many moves to larger facilities, Coy Sims broke ground on a facility in 1971 in which he could build his own building to ensure future growth. In 1973 he found an opportunity to add diversity to his business by purchasing a plumbing business. He acquisitioned R.F. Collier Plumbing in Nacogdoches. His focus was on residential plumbing service work and also new construction work. The plumbing division of his business also grew very rapidly and required more employees.

In the same year, he changed the name of the company to Nacogdoches Sheet Metal and Plumbing. In 2000 Coy Simms was ready to retire after 37 years of tireless devotion to his company. Terry Simms bought out his brother Coy and continued in the tradition. In 2008, Terry Simms sold to Jason Bradford, retired from United States Marine Corps, and his wife Stephanie Bradford. Even today, Nacogdoches Sheet Metal and Plumbing, LTD continues to provide the same services as it did in when it all started in 1963 but has grown even more with servicing more residential customers all over East Texas. The current owners are committed to ensuring that the original business goal is still the top priority: to provide exceptional quality of work and serve its community.

Today, Nacogdoches Sheet Metal and Plumbing, LTD is still located at 3804 NW Stallings Dr and employs an average of 45 employees.